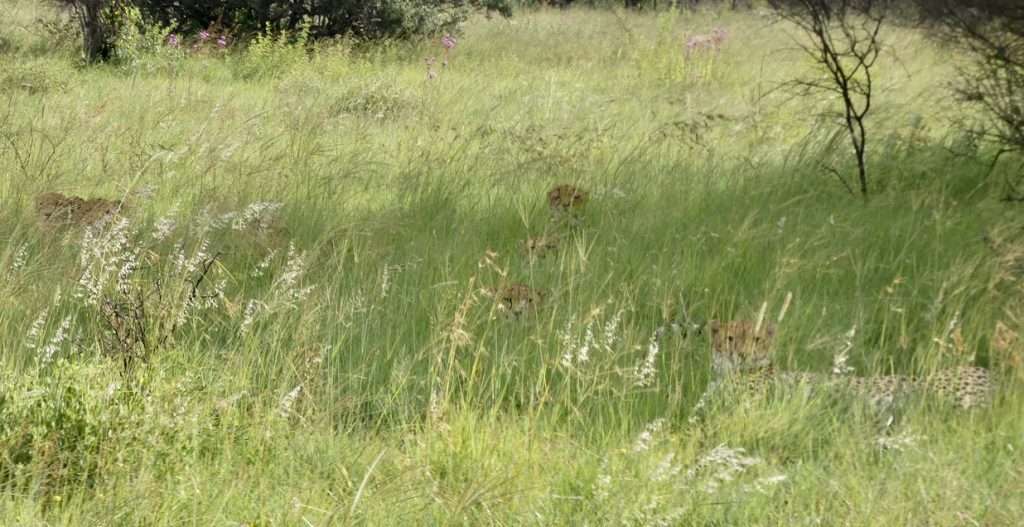 Seeing a coalition of eight cheetahs in the bush is more than a lucky sighting; it is rare and magical. What’s even crazier is that my friends and I had already seen this family many times during the year and a half before taking this photo. Here’s their story.

Two cheetah sisters had two litters around the same time. Sister one had six cubs, and sister two or three cubs. For whatever unexplainable reason, one of sister two’s cubs migrated to sister one’s family, making her the mother of seven. She quickly acquired the moniker of Super Mom by all the rangers in the park. One mom, seven cubs. She had to chase them all around when they were babies, feed them (they have about a 58% success rate when chasing down a meal), teach them the ways of the bush, and most of all, keep them safe.

Whenever we saw them, they were healthy, playful, and did whatever mom told them to do – move, rest, get down from a tree, get out of the road, stay quiet! We grew to love Super Mom and her growing cubs over the months. We also knew that the park would move some cubs to other parks when they were old enough to carry on by themselves and propagate the vulnerable species. But we weren’t prepared for what eventually happened to Super Mom and her beautiful family.

The story, quickly becoming Dinokeng lore, goes like this. Super Mom and her brood were moving through the bush when they ran into the big daddy lion, Marakele, who is the BMOC in the park. Super Mom put herself between her cubs and the lion, sacrificing her life in a brutal, unwinnable battle so they could get away.

Ok, go ahead and cry. We all do when we think of Super Mom’s bravery!

The last time we saw the cubs, they were able to take care of themselves. Super Mom did a good job!

The Golden Glow of the Bush

I am here to assist writers of all ages and experiences in making their words come alive on the page. Whether you need a series of writing sessions, a one-time consultation, editing, or a workshop with like-minded writers, I will help you become a fearless and focused writer.

I am here to help!

Some students need assistance with English conventions, organization, ideas, word choice, sentence structure, and finding their voice. Reach out and see how I can help!